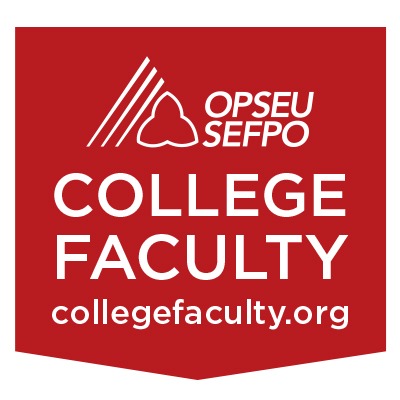 Toronto – The suspension of four college professors at La Cité collégiale in Ottawa shows why college faculty must have the freedom, and the authority, to make decisions on academic matters, the Ontario Public Service Employees Union (OPSEU) says.

“La Cité has suspended four OPSEU members for standing up for the integrity of their profession,” said JP Hornick, chair of the college faculty bargaining team for OPSEU. “College administration wants faculty to say that students possess the full range of skills related to the practice of respiratory therapy whether they do or not.

“This just shows what faculty have been saying all along: college administrators are making decisions about academic programs that they are not qualified to make,” she said. “In this case, administrators are putting both students and the public in danger.”

The union has proposed that the College of Respiratory Therapists of Ontario be brought in to assist with the matter.

The return to work of over 12,000 faculty after a five-week strike that ended November 20 has been plagued by problems that are interfering with the colleges’ efforts to save students’ semesters, Hornick said. Bill 178, the back-to-work legislation passed November 19, requires the parties to abide by the existing faculty collective agreement, but the colleges are refusing to do so.

“Unless the colleges begin issuing new contracts and Standard Workload Forms to faculty to make up the lost time, we are heading for a crisis very soon,” she said. “Faculty are working hard to save the semester, but we will not do it in a way that violates our collective agreement or the law.”

“The problems at La Cité, which is notoriously anti-union, are just the tip of the iceberg,” he said. “The colleges are engaging in a centrally coordinated strategy that appears designed to bust the union even if it means sacrificing education quality. That’s why I’m calling on Advanced Education Minister Deb Matthews to direct the colleges to obey Bill 178 and start cooperating with faculty to save the semester.”