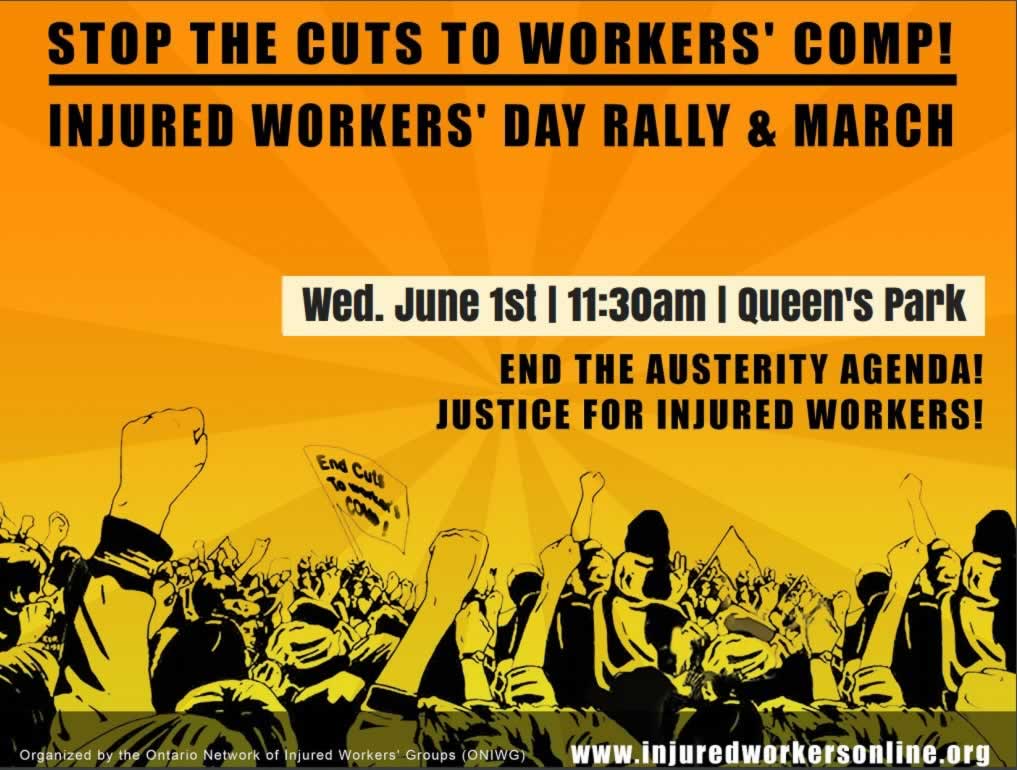 A message from the Disability Rights Caucus

On June 1 every year, we commemorate the historic actions taken by labour activists and ordinary citizens who collectively fought for and organized injured workers rights in Ontario. Almost 33 years ago, on June 1, 1983, more than 3,000 protestors gathered on the lawns of Queen’s Park and on the steps of the legislature to successfully oppose the government’s proposal to eliminate disability insurance for workers who had been permanently disabled on the job (learn more about this history here).

We rally on this day to pay tribute to these activists and countless others who created a new standard for workers' compensation in Canada. We recognize the generations of workers who have galvanized and inspired a movement for injured workers rights across Ontario. From the struggles of activists who challenged unregulated workplace hazards in the wake of worker tragedies (like the deaths of five construction workers at Hoggs Hollow in 1960), to the demands to reform a system of arbitrary and discriminatory compensation claims, to the proliferation in the 1970s and 1980s of injured workers' organizations, the movement for injured workers has transformed the lives of all workers. We re-dedicate ourselves to the fight today.

Employer schedules permit some employers to pay costs only when employees are injured. Experience rating provides a system of rebates and rewards for employers based on the number of claims and claims costs. Both of these schemes have caused employers to drive down and suppress claim costs.

In recent news reports, workers, lawyers, and health-care practitioners organized to protest the claw-back to WSIB services and benefits, and were critical of the arbitrary way in which WSIB claims were administered, arguing that WSIB “systematically ignored the advice of medical professionals.”

The DRC also calls on all OPSEU members to join in Injured Workers Day events across Ontario. A list of highlighted events endorsed by ONIWG and other worker rights organizations are below. For more information about these events, visit http://injuredworkersonline.org/events/.

May 31 – Women of Inspiration event

After the march, come to the Steelworkers’ Hall (25 Cecil Street) for an exclusive  pre-screening for injured workers of the award-winning documentary "A Day's Work" about a 21 year-old temp agency worker who was killed on his first day on the job.

Film screening and panel discussion organized by ONIWG and the Fight for $15 & Fairness.

For details on this screening and the 7:00 p.m. see the Facebook Event.

For  a full listing of rides across Ontario – in London, Chatham, Brantford, Hamilton, Mississauga, and St. Catharines, visit http://injuredworkersonline.org/events/justice-bike-ride/.