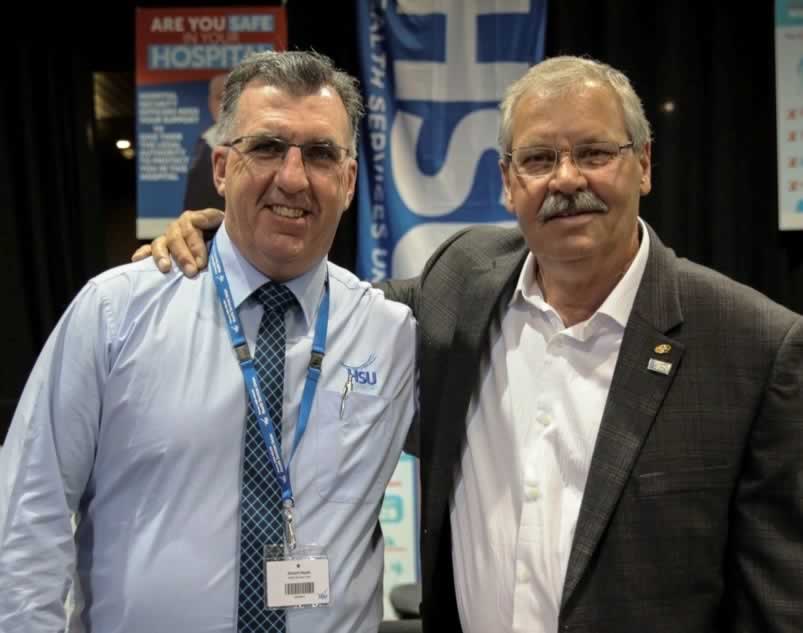 Sydney, Australia – Warren (Smokey) Thomas addressed hundreds of union activists in New South Wales, Australia, yesterday and urged unions the world over to redouble their efforts to fight austerity and privatization on an international scale.

Thomas noted troubling similarities between the austerity agenda of the right-wing Liberal Party in Australia and that of the Liberal government in Ontario. “Both governments are hell-bent on selling off public assets to their corporate friends at the expense of public services for ordinary citizens and their quality of life,” said Thomas.

He went on to underscore that both OPSEU and HSU fight for the general good, noting that it does not help union members if they live in a society where public services are starved and privatized, and where the gap between rich and poor continues to grow.

“The attack on our public services is an assault on every single individual – with the most vulnerable hardest hit,” Thomas told delegates. “Globalization means there isn’t a nation on earth that’s not threatened by cuts to public services, austerity measures, privatization and growing income inequality.

“Ordinary people are fed up with the corporate and political elite,” Thomas observed. “They’re fighting back. They’re finding their own voice. They’re looking at their world and saying, ‘We own it!’”

The OPSEU president concluded by calling on unions worldwide to create and strengthen ties with each other domestically and internationally, citing the OPSEU/HSU exchange as an example.

“A global crisis requires a global response,” Thomas affirmed. “We’re stronger when we share knowledge and best practices. We’re more effective when our voices are united.”

Founded in 1991, HSU has approximately 70,000 members who work in health care and social assistance across Australia. OPSEU represents over 130,000 public employees across Ontario.

Warm welcome to the new OPSEU/SEFPO members at Fred Victor

Warm welcome to the new OPSEU/SEFPO members at Fred Victor