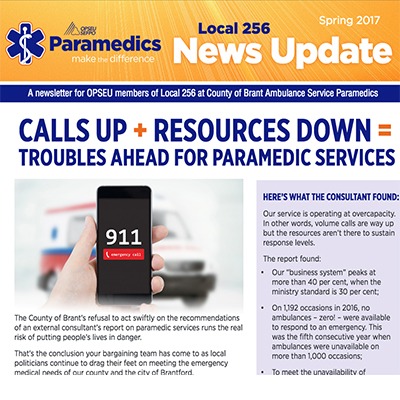 The County of Brant’s refusal to act swiftly on the recommendations of an external consultant’s report on paramedic services runs the real risk of putting people’s lives in danger.

That’s the conclusion your bargaining team has come to as local politicians continue to drag their feet on meeting the emergency medical needs of our county and the city of Brantford.

The consultant’s reported concluded what all of us at OPSEU Local 256 have known for some time: our call volume keeps increasing but our local government is reluctant to provide the resources to ease the problem which, if left unresolved, could quickly become a crisis.

It’s not as if we haven’t seen storm clouds on the horizon. In preparing for the county’s 2016 budget, paramedic director Charles Longeway put in a request for two additional ambulances capable of operating on a 24-hour basis. Instead of granting our ambulance service the vehicles, the county chose to hire an external consultant to review operations and make recommendations.

Here’s what the consultant found:

Our service is operating at overcapacity. In other words, volume calls are way up but the resources aren’t there to sustain response levels.

There are serious consequences to shortage of ambulances in Brantford county, starting with residents who rely on our emergency response system. The county and city of Brantford are putting patients at risk by not acting immediately on the recommendations of the consultant. The county says it hopes to have one additional ambulance in place by this summer.

The shortage is having an impact on staff, too. Paramedics are seriously overworked. It’s not uncommon that our members regularly miss their scheduled breaks because they’re responding to emergencies. This is a violation of our collective agreement and the practice must stop!

Some progress is being made at the bargaining table after several face-to-face meetings with the employer. We are negotiating with the assistance of a conciliator; the next step will be to go to arbitration. We are an essential service under provincial law, so work stoppage is not an option. We will keep you informed as developments take place. In the meantime, don’t hesitate to contact any member of the bargaining team with your questions or comments.