Save our vulnerable kids’ schools!

Rally for the schools April 14 at Queen’s Park 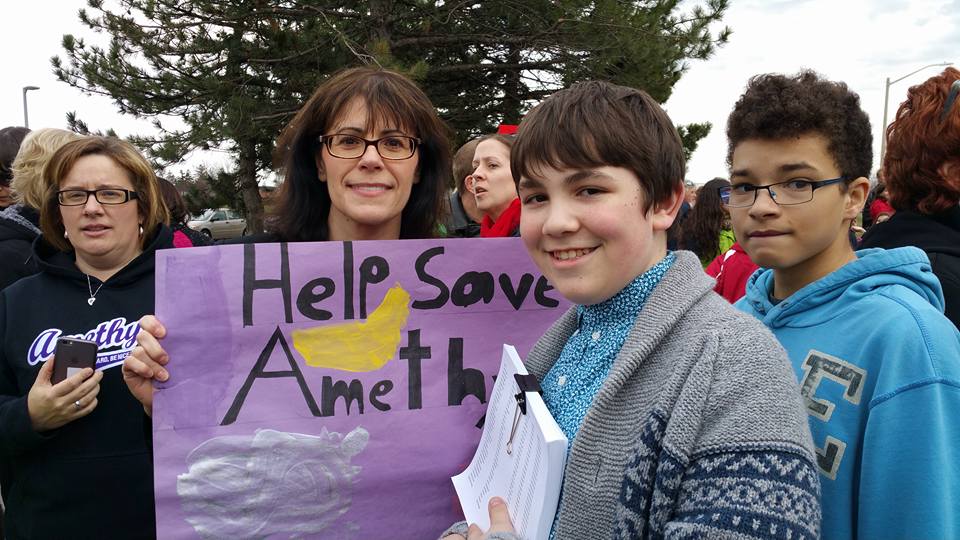 NDP MPP Teresa Armstrong shows her true colours at a rally to save Amethyst Demonstration School in London on March 30.

Parents, students, staff and supporters will rally on the lawn of the legislature on April 14 to tell Education Minister Liz Sandals to keep our demonstration and provincial schools open. OPSEU members are warmly invited to join them in person, if possible, or at least in spirit.

Convention 2016 attendees: Sign the petition and be part of the rally on April 14.

What is happening with demonstration and provincial schools?

The Ministry of Education is considering closing all four demonstration schools (for students with severe learning disabilities) and one provincial school (for students with hearing impairment) at the end of the current school year (June 2016):

In February 2016, Education Minister Liz Sandals announced there would be a consultation process with education and community stakeholders on these five schools’ future. She has invited input – from current and former students, parents of former and current students, teachers, staff and others – online surveys, with a deadline of April 8. A decision is expected in June.

All signs point to shuttered schools

OPSEU believes the consultation is just a preliminary exercise to permanently shutting down the schools:

What happens to students when their schools close?

On its web page, the ministry says students with learning disabilities will be supported by district school boards. But parents and teachers say years of underfunding mean cash-starved special‑education programs at Ontario boards cannot begin to support these kids.

Who is speaking out at Queen’s Park?

Members of the NDP and PC caucuses have been raising the issue, notably:

OPSEU is supporting parents, students and staff in their struggle to preserve the exceptional services that exceptional kids need and deserve:

Help save our schools!

Hundreds of vulnerable children and their families are counting on friends and allies to stop the government’s austerity wrecking ball from levelling demonstration and provincial schools. Get involved!

For information on how you can join the fight, please contact: